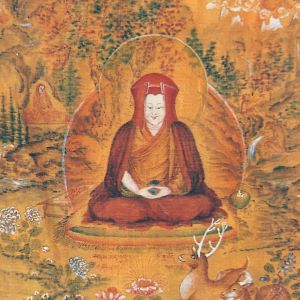 Lama Jampa Thaye visits Manchester regularly to give Buddhist teachings on key works of the Kagyu tradition. These teachings – the Shedra – are open to anyone with a serious interest in Buddhism.

Attending teachings and studying the text deepens our understanding of Buddhism and supports meditation practice by helping us develop insight into the nature of our mind.

During 2022 Lama Jampa will continue teaching Gampopa’s Jewel Ornament of Liberation, the key manual of study and practice in the Kagyu tradition. It gives a complete explanation of the Buddhist path from its starting point to the achievement of enlightenment, and is relevant to anyone who has a serious interest in Buddhism. Buddha nature, precious human life, impermanence, karma, suffering, loving kindness, compassion and the six perfections are among the topics covered in the Jewel Ornament of Liberation.

Gampopa (1074 – 1153CE) was the principal student of the great yogin Milarepa and is one of the most highly revered Tibetan Buddhist masters.

The shedra (College of Studies) in Manchester is named in honour of Mikyo Dorje, the 8th Karmapa (1507-54). He was a master of great scholarly and meditative accomplishment who wrote many authoritative works.

The texts studied at the shedra comprise works by Indian and Tibetan Buddhist masters. These include, for example, Nagarjuna; Gampopa; the 3rd Karmapa Rangjung Dorje; and the 8th Karmapa Mikyo Dorje.

It is essential to keep a record of Buddhist teachings we have received. By doing this we will know what we are able to study and practise.