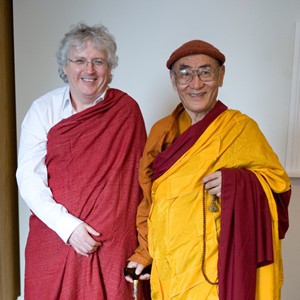 Lama Jampa Thaye is a scholar and meditation master trained in the Karma Kagyu and Sakya traditions of Buddhism, and is our main Buddhist teacher. Further, he is authorized as a lama by his two main teachers, Karma Thinley Rinpoche and His Holiness Sakya Trizin, and has been training students in all aspects of the Buddhist path since 1988. Lama Jampa  visits Manchester regularly to give teachings and interviews to students.

Master of the Kagyu and Sakya traditions of Buddhism, Rinpoche was born and trained in Tibet but left his homeland in 1959. Fourteen years later, in 1973, Lama Jampa Thaye met Rinpoche in the UK and became his student. Karma Thinley Rinpoche is one of Lama Jampa’s main Buddhist teachers. 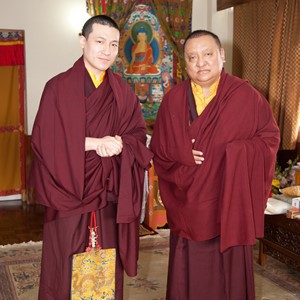 His Holiness the 17th Karmapa Thrinley Thaye Dorje is the head of the Karma Kagyu tradition of Buddhism. He has visited Kagyu Ling Buddhist Centre Manchester on two occasions, in 2009 and 2013.

The 14th Kunzig Shamar Rinpoche (1952 – 2014), the second most senior lama of the Kagyu tradition, made a historic visit to Kagyu Ling Buddhist Centre Manchester at the beginning of June 2014.