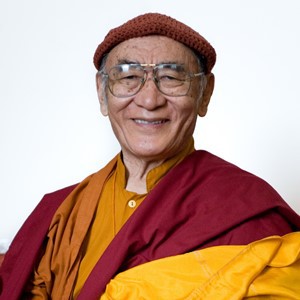 Karma Thinley Rinpoche, master of the Kagyu and Sakya traditions, was born in Tibet in 1931. He was appointed as the fourth in the line of Karma Thinleypas, famed for their scholarship in both Kagyu and Sakya schools, by HH the 16th Karmapa. In 1959, following the Chinese communist occupation, Rinpoche left Tibet in the party of the Karmapa.

In 1973 Karma Thinley Rinpoche spent three months in Scotland, where he met his English student Lama Jampa Thaye for the first time. Under Rinpoche’s guidance, Lama Jampa Thaye founded centres in the UK in Manchester and Bristol, the first in what would become a worldwide association of groups and centres. Rinpoche himself has established a nunnery in Nepal and a dharma centre in eastern Tibet. He has hundreds of devoted students, both Tibetan and Western.

His Holiness Karmapa was born in Tibet in 1983. His father was a lama and also a doctor. Having himself as a young child declared that he was the rebirth of Karmapa, he was formally recognised by Shamar Rinpoche, the senior disciple of the previous Karmapa, as the 17th incarnation of Gyalwa Karmapa according to the authentic Kagyu system.

His Holiness then came to India in 1994, and over the next decade was educated by Shamar Rinpoche and various other masters such as Chogay Trichen Rinpoche and Luding Khen Rinpoche.

HH Karmapa’s main residence is in Kalimpong, North Eastern India, although his duties as leader of the Karma Kagyu school take him around the world. His gentle compassion and unforced brilliance, aided by his fluent English, make him an extraordinary teacher. His Holiness has visited Kagyu Ling Buddhist Centre Manchester twice – in 2009 and 2012, when he bestowed several initiations and teachings. 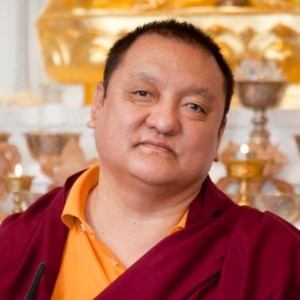 Shamar Rinpoche (1952-2014) was the 14th Shamarpa or ‘Red Hat’ Lama of Tibet. Born in 1952, Rinpoche was recognised by the 16th Gyalwa Karmapa in 1957. He spent many years studying in India with Buddhist scholars and subsequently taught in various Buddhist centres throughout Asia and the West.

Shamar Rinpoche founded a worldwide network of Buddhist Centres, Bodhi Path. In addition, he established several non-profit organisations worldwide which engage in charitable activities such as schooling under-privileged children and promoting animal rights. Shamar Rinpoche visited Kagyu Ling Buddhist Centre Manchester in 2014, where he gave an extensive explanation of the Mind Training teachings of one of his predecessors, the 5th Shamar Rinpoche.