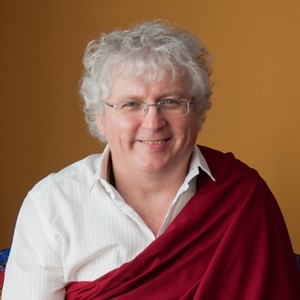 Lama Jampa Thaye is one of the most important western Buddhist masters of our time.

He was born in Bolton, England in 1952 and at the age of 20 became a student of the Tibetan lama Karma Thinley Rinpoche. A year later, he met His Holiness the 16th Karmapa, head of the Karma Kagyu school of Tibetan Buddhism.

Lama Jampa Thaye has received many initiations, transmissions and instructions from leading masters of Tibetan Buddhism.

In 1977 Lama Jampa Thaye was appointed by Karma Thinley Rinpoche as his representative in the West. Subsequently, in 1988 he received authority to carry out the activities of a lama. Today he remains one of the few westerners qualified to give all levels of Buddhist teachings.

Lama Jampa Thaye travels extensively and gives teachings and initiations across the world. He regularly makes visits to Mexico, India and the USA as well as many countries in Europe. He holds a doctorate from the University of Manchester for his work on Tibetan religious history. In addition he has many published works. These include, for instance, Garland of Gold (1990), Way of Tibetan Buddhism (2001) and Rain of Clarity (2006). He lives in London with his family.

“One of the great Western dharma teachers is my dharma regent, Lama Jampa Thaye. He is not only a great scholar, but also a great dharma practitioner.”
– Karma Thinley Rinpoche, Millennium Letter, Toronto 1999