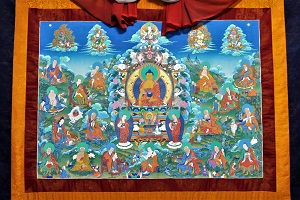 This thangka, which hangs in Kagyu Ling, depicts Buddha with the 16 Arhats

The third of the four Buddha Days of 2022 – Chokhor Duchen – will be celebrated on Monday 1 August and the 16 Arhats sadhana will be practised at Kagyu Ling Buddhist Centre, Manchester, at 8pm. People can also join on online: Buddha Day zoom.

Chokor Duchen means literally the ‘turning of the dharma wheel’ and marks the first teaching given by Lord Buddha in the deer park at Sarnath. It falls on the 4th day of the 6th Tibetan month.

It is said that the merit from dharma practice done on Buddha days is multiplied many millions of times.

Anyone who has taken refuge is welcome to sit in during the 16 Arhats puja either at the centre or online. The 16 Arhats were realised disciples of the Buddha who made a particular vow to preserve and protect his teaching.

Buddha Days  commemorate significant events in the life of the Buddha. The final Buddha Day this year is Tuesday 15 November:  Lhabab Duchen – the descent from the gods.